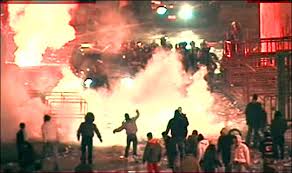 Our society is failing. We see the everyday brutality in our streets and countryside, and politicians say that the don't know the cause. Crime is rising, and the police will become powerless, giving the powers that be the excuse to bring in the army. Anarchy will rule.

Many say that it's caused by poverty, but we've been poor before, and even more impoverished than we are now. How can it be poverty, as the young can afford drugs and booze like no generation has ever been able to do before?

Turn your mind for a while, away from the old tried and tested propaganda bullshit. Every government in the world has its own form of misleading nonsense. What's so different about our generations, in this, our time? Think from a psychological point of view. Finances have a part to play; but it goes deeper than that.

For a start, the banks have never had so much control and so much money to use to get their way; their way being to make more money. The problem is that ten percent of the population own ninety percent of the wealth of the world.

Communists will jump on this one, stating that a share-out of wealth will reverse the problems. So why did Communism fail before if it was as simple as that? All it meant was that different people now owned the wealth and power, and the ordinary people still got it in the neck. Wait till they take away your cash and leave you with plastic. And they will. How's that for power over the masses?

Turn to psychological facts, not the usual T.V. tailored-to-be-sexy type, but the real psychology, the hard cold factual type that nobody wants, because it’s not always nice. It doesn't always tell you what a wonderful person you are. It tells the truth. No one wants that, do you?

Fact – we have two levels of mind. One: the conscious mind that you are well aware of. Two: the subconscious part that we are totally unaware of, because the subconscious is below out level of awareness, and has no ability to reason. It controls every function of your body and has an overpowering effect on the conscious, believed to be reasoning, mind.

The subconscious contains all your memory, all your emotions; all your genetic, instinctual knowledge. All of this, together with all your repressed life experiences, even from birth, can and often does create great problems. It represses distasteful or frightening information, burying it deep, as if it never happened. Unfortunately, it has no power of reason, and it then holds on to the emotion connected with that repressed event. That emotion is fear. Fear is a very powerful thing, as it affects your strongest instinct, which is self preservation; followed secondly by reproduction. Such buried experiences then affect all your thinking.

We instinctively seek the nipple when were born. We instinctively fall in love with our mothers. And I mean, fall in love. Imagine that the nipple is taken away. Perhaps mother is unwell and can't help it. Then again maybe she has a career and wants to go back to work, as our society presses. We've burned our bras and we are now independent women. To be less would be unthinkable. We don't need anybody. Unfortunately your baby needs you, and will do for years.

The nipple is gone, and so an anxiety is formed in the mind of the recently born, and they are helpless to do anything about it, except of course cry maybe, but the doctor will give you something for that. You won't notice it, because it's deep.

Then little Johnny or Maggie is taken to a child minder. Mother is now gone for a long time, and perhaps she won't come back. Another anxiety is developed. That feeling of being unwanted deepens. Then there's the change of child minders, or that crÃ¨che where there are a number of employees. All well intentioned. They are trained after all. They can't replace mother, no matter how well trained or well intentioned.

Why doesn't Mummy want me? Am I that bad? Why? Why? No real answers come to the childish mind: only imagined ones, and that mind-numbing sense of inadequacy.

The subconscious is active before we’re born. It's obviously active in the sperm. It’s what guides it to the egg as it swims.It registers all the events and holds on to the emotions. The event is then repressed into a subconscious cubbyhole, where they never get dealt with. They stew down there in the dark depths, creating a right old brew of unconscious, emotional fears. They wait.

The child goes to school. Mother sends him or her off. They go to Granny or another child minder till Mummy comes home. She feeds them. Maybe they will have been fed already. So, off to bed; Mummy and Daddy are tired. Day after day, year after year.

Holidays are a great time, except Mummy has to work, and so it's off to the child minder again. Like weekends, more child minders. Mummy and Daddy need to ‘relax’. It's a pity the children concerned can't.

You give them everything except what they need: maternal and paternal love. You don't give them what they need, and you must know in your heart and soul that your getting things wrong. Why? Don't you care enough? Or could it be the constant programmes on T.V. showing you the independent woman with her nice car and enjoying yet another ‘glass of wine’, or perhaps ‘a pint’ with her equally mindless dressed-for-a-laugh friends? What a beautiful dream.

After a while it can override reality. When you allow your reality to be overridden, it has a knock-on effect. Your kids get less of what they actually need. Now I'm not talking about what they want, or material things, but what they need. Things like time, Mummy, Daddy. Little things like that.

Some years ago the bankers saw how many women were at home, taking care of their families. They calculated how much these women could earn if they could be coaxed into work. Governments liked the idea, because there would be more taxes. Business liked it, and the new washing machine looked so nice in the ads, so soft girl liked it. Certain bankers bankrolled the feminist project, with T.V. programmes and magazine articles to grab the feminine mind.

So off went Independent Woman, burned her bra, and straight into the work place, her head full of what bastards men are, and how she can do without them, like any other lesbian. All this is according to the lesbian propaganda, with no regard for reality.

Now, to come back to our society. The child brought up without its mother’s constant love and affection, grows without a bond. It can no longer fully relate to anyone, as over its life it has learned that affection is painful, so it stopped the pain a long time ago. Suddenly you find out that your child doesn't view you as a father or mother, but as someone it lives with from time to time. You’re on the same level as the child minder; and it's your fault. Now, because the child has no sense of belonging, its anxieties overflow, and it becomes a drug abuser, or worse.

The typical teenager is trying to feel something that fills its sense of emptiness. The child grows and marries. So later on she doesn't need a man. She make her feeling known: his ‘bonding abilities’ are also suspect. And so off he goes. No man or woman stays where they are not needed, or even wanted.

The kids get some more fathers. Again no bond. Gradually no one really loves or has bonds with anyone. Children are off on their own at eighteen, or they’re frowned upon by their mindless supposed-peers, if they’re not. Little contact, little bond. Government and the bankers are realizing their dream: a vulnerable population, tamed and trained for when they put the big squeeze on.

You’re off to school at five, or even four and younger. For whose benefit is a child so badly abused? “It's only psychological though…”, I hear you say. “There's no blood and no bruises”. And then there's the car payments and the mortgage.

The Critical Factor isn't in place to filter the information that gets fed to them. The Critical Factor is a filter between the conscious and sub-conscious parts of the mind. “You are a stupid little girl”, is different to, “You're a little girl who does stupid things”. Both are taken literally by the child without the Critical Factor, which develops by about eleven to thirteen years of age. When the Factor is in place the child can define the meaning behind the statements. He or she can now judge, and throw out what it doesn't like. He or she can now deal with it. It no longer accepts statements you make literally. The filter sorts it all out.

Before the Critical Factor develops, the mind is vulnerable to all sorts of things that are not for his or her benefit. Remember who designs the school curriculum and the rules in general? The Government, religion and the independent bankers. As a group, the unholy ten percent.

Beliefs are set in, and not just religious beliefs. So are the children trained like Pavlov's dog, to do tricks; full to the lid with rote-learned facts. Or are they just beliefs, and not actually facts? But the Government likes it, and the independent bankers and the religious leaders like it.

But what about you? Your information is filtered, so you probably don't know any better. Like that old Jesuit saying says,”Give me a child until he is seven and I will give you the man“. What else will they do to the mind of a child, before the Critical Factor comes into play? To what purpose do they insist on doing it? Why do they make laws that require you to send your children to school at such a tender age? Why not wait till they’re eleven, when the can really learn? Who profits from this, the most stupid of all ideas?

“Independence!” Rubbish! Independence is loneliness. You don't care about anyone and no one cares about you. The care home looms: beware! Who will take care of you? Not your children, that's for sure. Society pretends to care, but it really doesn't.

The working to middle classes get the rough end, one way or another. Why? Because they don't pay attention to the mind: the whole mind, and nothing but the mind. After all, it's discouraged by the State, Religion and the Independent Bankers. Wait till they take your money away, and give you a piece of plastic. What power they will have, the Unholy Trinity. And what power won't you have, with your piece of plastic, instead of hard cash? Separate, alone…..imagine.