They include animals being beaten, neglected and illegal procedures in the process of slaughtering British horses destined for European food markets.

It comes amid public anger that some of our biggest supermarkets have been selling beef burgers and other products that contained horse meat.

Investigators at Hillside fitted secret cameras which filmed horses being beaten with an iron rod to encourage them into the pens.

Figures from the Institution of Mechanical Engineers show as much as 2bn tonnes of food never makes it on to a plate. 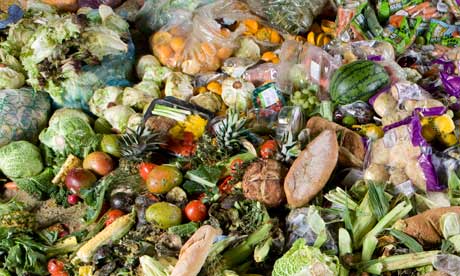 etween 30% and 50% or 1.2-2bn tonnes of food produced around the world never makes it on to a plate. Photograph: Murdo MacLeod for the Guardian

As much as half of all the food produced in the world ,“ equivalent to 2bn tonnes ,“ ends up as waste every year, engineers warned in a report published on Thursday.

In the face of United Nations predictions that there could be about an extra 3 billion people to feed by the end of the century and growing pressure on the resources needed to produce food, including land, water and energy, the IMechE is calling for urgent action to tackle this waste.

Their report, Global Food; Waste Not, Want Not, found that between 30% and 50% or 1.2-2bn tonnes of food produced around the world never makes it on to a plate.

In the UK as much as 30% of vegetable crops are not harvested due to their failure to meet retailers’ exacting standards on physical appearance, it says, while up to half of the food that is bought in Europe and the US is thrown away by consumers.

Respect you all that grows upon the Earth and from the Earth, especially the green things which do not bleed as you do nor cry out in pain. You live only because of them. They stand not only between you and death; they are your link with the Mother Earth. (The fifth of the Seven respects)

For a man to calculate his value, should his conceit require him to do so, he calculates that which he does not have in natural fashion. He has it only in pretences; yet not accepting that he can never sustain that which is only pretended.

Such people know justice naturally; and some never get the idea, as their self-seeking attitudes prevent it. Many view those that they consider to be wise, aping them, hoping it will somehow pass to them. They shall know only disappointment, and look foolish.

The wise lead; lesser must learn to assist, not hinder. Not through jealousy or envy, but in caring study and self control.

When a man is concerned with his value, he is not concerned with the actions and psychological patterns that create his true value, but only in that which is imagined.

Mankind seeks to improve himself only according to that which he thinks he is, which is according to his fancy; not knowing that the valueless person cannot attain value through deceit, either of the self, or of others.

He may calculate his true value, or his false value, either real or just imagined, according to his baseness. In such manner he confuses himself, losing the self in his own confusion and disappointments, as he shall surely fail.

The wise one is always aware of his or her imagination; not letting it rule him or her, but managing it with care. He or she uses it to good purpose.

Imagination can lead you to destruction, or take you to higher levels of knowledge, according to its management, which is self chosen, and often according to ego.

Many imagine themselves to be Caulbearers, knowing that they are not. They then invent things to give them a sense of self importance. By doing so they are dishonest with themselves, as well as with all that they come into contact with.

So do they reduce themselves; and so, in search for higher value, they achieve a level of total worthlessness.