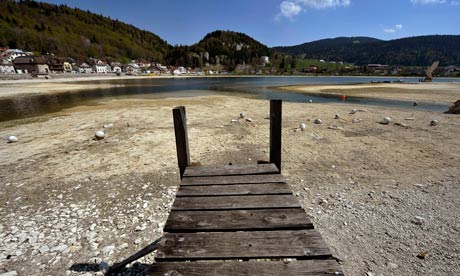 Under the weather … a pier on the drought-hit Lac de Joux in Le Pont, Switzerland.

The year 2010 may have been the most extreme in terms of weather since the explosion of Indonesia’s Mount Tambora in 1816, when much of the world experienced reduced daylight and no summer, says one of the world’s most prominent meteorologists.

A combination of abnormal climatic phenomena resulted in the year being the hottest, wettest, and in many cases also the driest and coldest in recorded history, says Jeff Masters, co-founder of climate tracking website Weather Underground.

According to Masters 2011 is already on track to be exceptional, with a deepening drought in Texas ,“ where 65% of the state is now in “exceptional drought” conditions ,“ and one of the warmest springs experienced in 100 years taking place across much of Europe. It is also the most extreme tornado year recorded in the US, with Arctic sea ice already at its lowest ever for the time of year.