The violent police assaults across the US are no coincidence. Occupy has touched the third rail of our political class’s venality 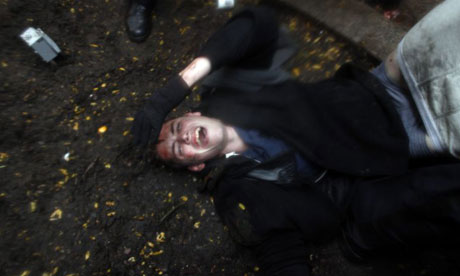 US citizens of all political persuasions are still reeling from images of unparallelled police brutality in a coordinated crackdown against peaceful OWS protesters in cities across the nation this past week. An elderly woman was pepper-sprayed in the face; the scene of unresisting, supine students at UC Davis being pepper-sprayed by phalanxes of riot police went viral online; images proliferated of young women ,“ targeted seemingly for their gender ,“ screaming, dragged by the hair by police in riot gear; and the pictures of a young man, stunned and bleeding profusely from the head, emerged in the record of the middle-of-the-night clearing of Zuccotti Park.